The pressure is one of the important parameters in industrial production. To ensure the normal operation of production, pressure must be monitored and controlled. The following are the terms commonly used in the model selection of the low differential pressure sensor:

It refers to the magnitude of pressure expressed by taking the absolute vacuum as the standard.

The magnitude of the pressure for the comparison object (standard pressure).

It refers to the adaptive pressure range of the low differential pressure sensor.

7. The pressure that can withstand

When the low differential pressure sensor returns to the detection pressure, its performance does not degrade under the pressure that can withstand.

At a certain temperature (23°C), when the pressure is increased or decreased, the pressure variation value at the operating point is obtained by dividing the pressure value of output reversal with the full-scale value of the detection pressure.

At a certain temperature (23°C), when zero pressure and rated pressure are applied, the value is obtained by dividing the deviation from the specified value of the output current (4mA, 20mA) with the full-scale value, the unit is expressed by %FS.

The output of the simulated low differential pressure sensor varies linearly with the detection pressure, but it has a deviation compared with the ideal straight line. The value of this deviation expressed as a percentage of the full-scale value is called linearity.

The structrue of the Capacitive pressure sensor

The fourth fault is the large deviation between the transmitter and the pointer pressure gauge. Deviation is normal, just confirm the normal deviation range.

What kind of output signal the pressure transducer needs: mV, V, mA, frequency output, and digital output, depends on many factors, including the distance between the sensor and the system controller or display, whether there is “noise” or other electronic interference signals, whether the amplifier is needed, and the location of the amplifier. For many devices with a short distance between the pressure transducer and the controller, the pressure transducer with mA output is the most economical and effective solution. If the output signal needs to be amplified, it is best to use a sensor with built-in amplification. For long-distance transmission or strong electronic interference signals, it is best to use mA output or frequency output.

The main purpose of the negative pressure isolation room is to separate the patient from the surrounding environment and people, avoid direct contact with the body or air exchange, and prevent cross-infection.

Since the air pressure of the negative pressure isolation room is lower than the outside world, only fresh air from outside can flow into the ward, and the air contaminated by the patient in the ward will not leak out directly, then will be discharged to the waste through a special pipeline in time processing equipment. It can be said that the negative pressure isolation room is like a space completely isolated by a “mask”, and the place outside the ward will not be contaminated at all, so that medical staff can safely carry out activities outside the ward, reducing the possibility of a large number of infections. This kind of ward is most suitable for treating patients with respiratory infections like SARS.

The negative pressure isolation room is not just a room, but is composed of three parts: a ward, a buffer room, and a bathroom. The pressure difference in each room is -5Pa from the inside to the outside.

Some people may worry that if the room is under negative pressure, will the patient have difficulty breathing? Of course not. Although the pressure is lower than the outside world, it is only 15Pa less. The atmospheric pressure on the ground is generally around 100KPa, and changes in tens of Pa will not affect the patient’s breathing at all. On the contrary, through the careful care of the fresh air system, the patient can better recover the body and get rid of the disease.

In order to keep the various ventilation equipment in the ward running normally, a micro-pressure gauge should be installed in the ward, buffer zone, and bathroom door, and a dedicated person should record it regularly to ensure that the indoor pressure difference fails. 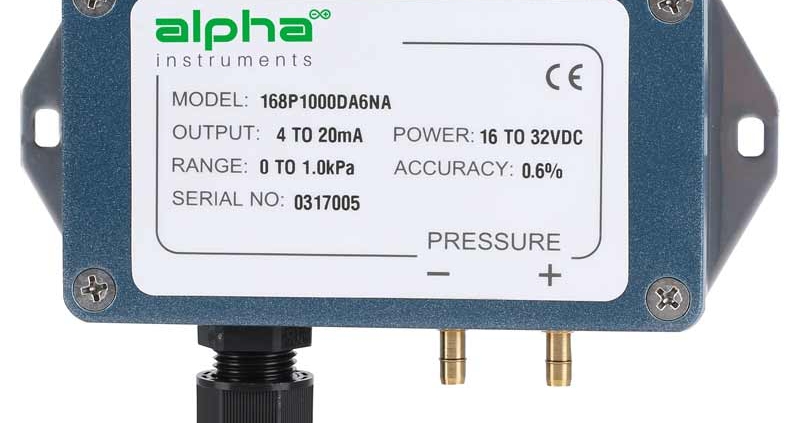 1. The classification of the low differential pressure transmitter

2.  The application of the low differential pressure transmitter

Based on what we have learned, it is realized that the displacement transmitter is more approved by the market than the force-balance transmitter in today’s measurement field. The same is true in the design process of the glass production line. However, in terms of differences in measurement objectives and accuracy, there are still differences in the selection of the low differential pressure transmitter. 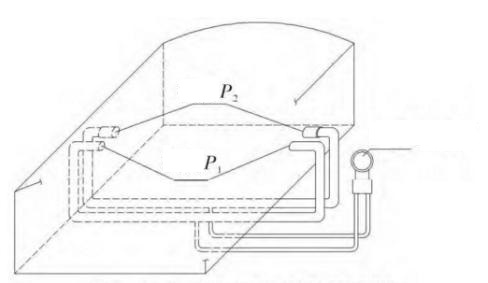 In addition to its important role in the key measurement areas in the glass production line, the low differential pressure transmitter has many derivative applications, such as the measurement of the height change of the glass liquid level and the liquid level height, etc, which will not be described in detail here.

3. The development of the low differential pressure transmitter

Compared with liquid, it is more complicated to measure gas flow due to its compressibility. The volumetric flow rate Q of the gas is a function of the differential pressure (P1-P2) and the density ρ while the density is a function of the current temperature and pressure of the gas. In the practical application, there will be a large measurement error due to the difference between the current density of the medium and the density during design. Therefore, temperature and pressure compensation should be performed on it.

In the past, designers install both thermal resistance and a pressure transmitter near the location where the gas pipeline is set up the flowmeter. All three groups of signals are entered into the DCS system, and the compensation calculation is completed with the formula in the computer system. However, this model is gradually being replaced nowadays. With the emergence of a new generation of multi-parameter intelligent transmitters, this type of transmitter comprehensively improves the accuracy, reliability, and long-term stability of the low differential pressure transmitter by using a microprocessor as a basis. 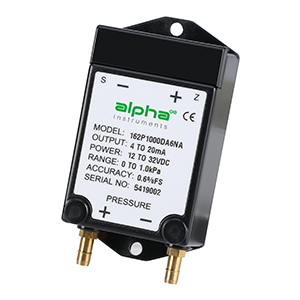 The intelligent or mechanized operation of all walks of life can’t be separated from the development of science and technology and machines, which also gradually reduces the load of manual labor, greatly improves the efficiency. Pressure transducer is the most common sensing instrument in industrial practice. It is widely used in various industrial automation environments, such as water conservancy and hydropower, intelligent buildings, aerospace, military, petrochemical and many other industries. However, because it is indirectly related to your daily life, you will not know much about it, so Alpha Instruments is going to talk about it in detail.

Pressure transducers can be divided into a variety of different types, such as heavy-duty type. It is usually used in transportation to maintain the performance of heavy-duty equipment mainly by monitoring the pneumatic, hydraulic, brake pressure and air brake and other key systems of pressure, flow, and liquid level. This pressure transducer has a housing, a metal pressure connection, and a setting device for a high-level signal output. It is cylindrical in appearance with a pressure connection at one end and a connector at the other. It can be used in extreme temperature and electromagnetic interference environment. Customers in the industrial and transportation fields can use the industrial pressure transducer in the control system to effectively monitor and feedback the pressure of cooling liquids, lubricating oil and other fluids. Once problems are found, timely measures can be taken to solve them.

The above is the main classification of pressure transducers and their application in the industrial field. 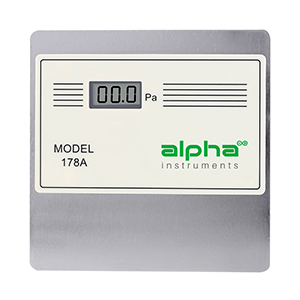 The low differential pressure sensor is powered by 5V with an output of 0.25-4V. Although it is the analog output, the internal linearization and temperature compensation are all realized digitally, ensuring high accuracy and resolution ratios (up to 0.05 Pa). It is thus unsusceptible to temperature.

The low differential pressure sensor has two specific output modes, including linear and square output which are completely interchangeable. Relying on simple peripheral circuits, such as 0-10V output or other interfaces, high-quality transmitters can be produced.

The low differential pressure sensor has the following characteristics:

6. Stainless steel cover that is easy to install and ensures excellent cold and thermal stability

7. Process connections are compatible with other products for optimal measurement

8. Adoption of the intelligent transmitter with a 16-bit computer

Pressure is one of the most important parameters in industrial production. In order to ensure the normal operation of production, pressure must be monitored and controlled to achieve automatic control, safety monitoring and alarm functions. Pressure transducers are widely used in pressure switches and vacuum equipment, flow control, air conditioning system fan control, etc. Accurate measurement is a key requirement, and the ability to withstand harsh environments is also important. The transducers produced by Alpha Instruments have always enjoyed high reputation and are your best choice!

1. Calibration is needed by pressure transmitter

After being used for a while, the measurement performance of the pressure transmitter may be changed, and the phenomena of zero drift and increasing measurement error will appear. Therefore, it is necessary to carry out regular calibration of the pressure transmitter. The calibrator should be 3 times more accurate than the required calibration accuracy. Standard pressure values of 0%, 25%, 50%, 75%, and 100% are input successively into the transmitter via the pressure calibrator in a forward and reverse manner, to detect whether the output signal of the electric current is within the allowed accuracy range. If out of range, it needs to be calibrated.

The calibration methods are as follows (4~20mA output):

(1) Input the standard pressure of 4mA with pressure calibrator and adjust the ZERO potentiometer to make sure that the electric current output falls within the accuracy range;

(2) Input the standard pressure of 20mA with pressure calibrator and adjust the SPAN potentiometer to make sure that the electric current output falls within the accuracy range;

(3) ZERO and SPAN potentiometers are mutually restrictive. Repeat step (1) and step (2) until both the current outputs of 4mA and 20mA meet the accuracy requirements, and then check whether the current outputs of 25%, 50%, and 75% meet the accuracy requirements. If so, it indicates the calibration of pressure transmitter produced by pressure transmitter manufacturer is qualified.

Alpha Instrument Inc. is specialized in the development and manufacturing of low differential pressure sensors, which have been used in heating ventilation air conditioning, critical environment, medical industry, semiconductor equipment, and other fields. Our innovatively designed products provide long-term stability, higher sensitivity, and higher overvoltage capacity. Welcome to contact us to buy!

Nowadays, extensive researches on pressure transmitter are carried out around the world, diving into almost every industry.

Due to the emergence of intelligence technology, some microprocessors can be added to the integrated circuit, equipping the pressure transmitter with functions of automatic compensation, communication, self-diagnosis, logical judgment, etc.

There is a growing demand for micro pressure transmitters as this kind of transmitter can work under extremely harsh environments, which requires few maintenance and produces small environmental affects.

A series of standards about the design and manufacture of transmitters have been established.

Another development trend of pressure transmitter lies in its expansion from the mechanical industry into other fields, such as automotive components, medical instruments, and energy and environment control systems.